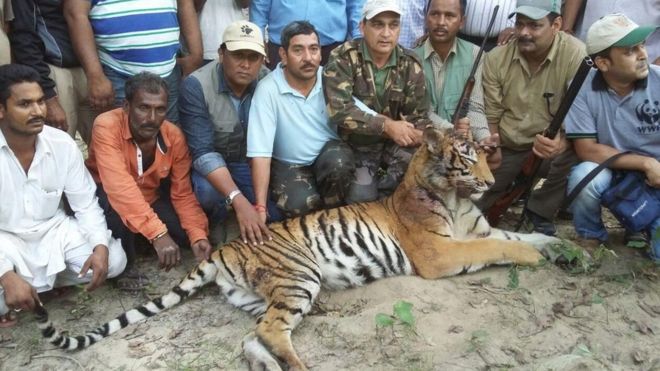 Nainital: After a long search of 40 days that has finally ended up on approximate expenditure for around INR 1 crore, the obscure man-eater tigress who had been moving in the region around Ramnagar was ultimately shot dead on Thursday Oct 20 2016 in Gorakhpur Village by a shooter from forest department. The forests’ conservatorof western circle, Mr. Parag Madhukar Dhakate who was leading this tigress search operation revealed some details about the incident to TOI saying that with the use of camera traps, the man-eating tigress was located in the morning time near Gorakhpur. After spotting here there, the team along with a shooter approach her. The team was riding on three elephants. Along with the team, there had been hunting dogs, a group of 150 trained personnel including 5 trained shooters, above 100 camera traps, a helicopter and drones that were used to reach out and kill the tigress.

As the tigress was inclined to hide in the fields of sugarcane, she got another name “Sugarcane Tigress”.  This tigress badly injured 4 people and killed 2 by attacking them in September 2016. So, these incidents made villagers feel fully scared to go out of their residents during sunsets. Moreover, all students or young people were stopped to go to school just because of this man-eating tigress which is luckily now shot dead by the intense efforts of forest department.