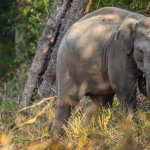 The resident of the Kashipur Housing Development Colony in Udhamsingh Nagar and the wife of Gurdev Singh, the deceased, Amrita Kaur (42 yrs.) had gone for the tour in the Sitabani tourism zone on the motorcycle with Indrajeet whom she treated as her brother-in-law. He also lives in the same colony.

Both were returning from the Sitabani Temple located in the Sitabani forest when a wild elephant suddenly came in front of their motorcycle. The motorcycle got unbalanced and they both fell down from the bike. Seeing the elephant, they tried to run away from the spot, but the elephant caught the lady with his trunk and dashed her on the ground and then smashed her with his legs.

The senior forest officers Neha Verma, DFO along with Ranger Lalit Joshi, Pramod Pant and Virnedra Pandey visited the hospital when got the information. The woman’s husband also reached the hospital. According to the DFO, an investigation of the incident will be initiated soon. Also, Rs. 1 Lakh has been given as an instant relief to the family of the deceased.