The Dhela Safari Zone sprawl over 1173 hectares is the sixth ecotourism zone of Corbett Tiger reserve that was kept on CTR tourism map in the year 2014. It was crafted out of the southern buffer forests part of the Corbett. A forest of Dhela has the distinction of seeing seven tigers once in Corbett’s seventy five years of history. This forest has mixed forest plantation and moist deciduous shelters various species of wildlife including Sambhar Deer that attracts tigers as they get easy hunt. It is also true fact that Sal forests area is favourite area for tiger hunting their prey. Watch Tower built inside the Dhela Zone help tourists to see wild animals from far away. Dhela has 46 kilometres of Jungle Path where you can spot varied wildlife species. Travellers can enjoy Jeep Safari in morning as well as in evening shift. In a shift only 15 gypsies are allowed to enter inside the zone. Dhela is particularly known for bird watching. Dhela remains open throughout the year. 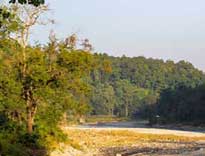 Jungle Safari – Dhela tourism zone in terms of Corbett Jungle Safari has the highest tiger spotting status after the Dhikala Tourism Zone in the year 2019-20. The demand for Jeep safari in Dhela is always remains high. Many times tigers have been spotted just at the entry gate of the zone which signifies that Dhela has high density of tigers.

Best time to visit Dhela Zone : - The months of October to mid June.

Chaurs (Grass Lands): This grass land is the major attraction of the Dhela Tourism Zone. Chaurs is often seen occupied with elephants and deer. Neel Gai and Wild Pig can also be seen here.

How to reach: The entry for Dhela Eco Tourism zone is joint and common with the Jhirna zone. And the gate is located at a distance of approx twenty kilometres from Ramnagar.

Note: Dhela Zone remains open throughout the year for tourists.